So if you are up to date on Jeremy’s blog you will know that this month we celebrated our 2 year anniversary. Let me tell you that time has gone by SO fast! Anyway, a few weeks before the date I began contemplating gift ideas for my man. Now, I just love giving gifts to people. I love spending time and choosing the right gift for that special occasion and person. But I couldn’t think of a single thing that I could get Jeremy that he would really appreciate me spending money on. Most of the things I know he would like are beyond our budget. I could think of plenty of things to get him that I would enjoy, ha=} but that’s pretty selfish…so I was stuck.

I spent time finding the perfect card but seriously couldn’t come up with a great gift idea. I’ve spent 2 years living with this man and don’t know what he wants for our anniversary?!?! I even called my sister asking her for advice and ideas. She suggested maybe tools or a back massager, but Jeremy has tools and he’s not too much of a fixer guy unless he is in the mood – and the back massager I know would spend most of its time in his hands because he’s just generous that way. But my sis did give me a great idea for how to know what to buy him for future reference. She advised that we sit down and make a list of gifts that we personally would enjoy that covers different price ranges just to allow for different options. Then swap that list so there won’t be any questions as to what to get. So – the day of our anniversary I came home from work a little down because I just had a card to give him. He noticed that I wasn’t too thrilled and we sat down and talked and I explained that I didn’t have a gift for him, and suggested that we make lists for each other for the next occasion.

Anyway, so of course he was generous and could care less because he was so excited to give me my gift because he knew it was exactly what I had been wanting for some time now. And here they are – two white rocking chairs for our porch!! We use them pretty much everyday now – well when we are home. I’m so thankful for them – way to go Jeremy! So that’s the story. Hopefully for his Birthday I’ll be able to get him that “perfect” gift. I have some time to plan as it is not until December. 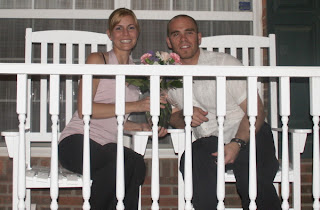 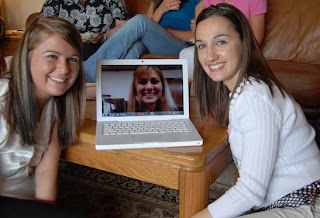 I am just so thankful for modern technology!! Last weekend my younger sister had a bridal shower in Montana and I wasn’t able to “be” there. We were on tour and had a show that night in Burlington, WI. So just before the craziness of the night started I was able to get online and use a web cam and be a part of it via internet! They also have a web cam so when I called, my older sister walked me around the house and showed me all the people and decorations and presents and food and then “sat” me on the coffee table in front of my other sister to watch her open gifts. It was such a treat!! Then my mom wanted to get a picture of her three girls so here it is… quite funny actually! Nevertheless, I was so thankful to be a part of the afternoon. I just love my family and it’s times like these when it is so painful to be so far away. So those of you who may live right down the street or even within reasonable driving distance from your family don’t take it for granted and enjoy time with them while you can! 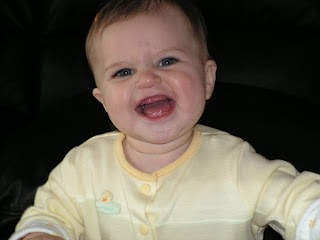 This is my precious niece Ella! She has two new bottom teeth and is not afraid to show them off. What a killer smile huh! She lives in Montana so I don’t get to see her very often but I love her dearly! She belongs to my older sis! My younger sis is getting married in June so we’ll be up there soon. I’m REALLY looking forward to it.

This last weekend went really well. We had three concerts out east and I have some great pictures that I’ll post later this week.

This is my running partner, Krista, (Glenn’s sister) as we cross the finish line! What a cool shot! For the record this time is not our marathon chip time because it took us 24 mins. to get to the starting line=}.