For those of you who have not yet seen these pictures here are a few highlights from our trip to Ireland. What a huge blessing it was to be a part of such a cool event. Downhere played in the Odyssey Arena – the largest venue in Northern Ireland – and opened for Chris Tomlin! It was such a great night and I am so thankful I got to soak in that experience. It was a bit stressful for me as we lost our largest merch suitcase on the way to the event so we didn’t have all that we wanted to hopefully sell to 3,500+ people. But I had joyful merch volunteers and we sold out of all our Wide-Eyed CD’s. AND I just loved having that responsibility that evening even though we didn’t have all our merch. I am so thankful for my job and loved watching the guys give their all to a crowd who ended up loving them by their second song… and who, by the end of the night, enjoyed Chris Tomlin’s set, but raved about downhere’s set. God is good and he was glorified that night and I got to see him use these guys to make his name known in N.I.

We did get a day after the concert to sightsee around the coast. Here are a few pictures from the 4 days we had there. This was my first time so I couldn’t take enough pictures!
Erin

downhere at the Odyssey 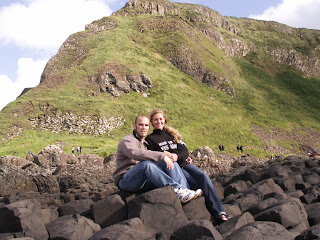 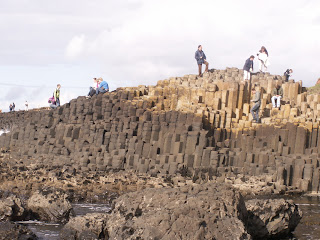 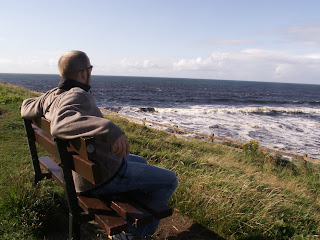 Me and my new friend Cherith. 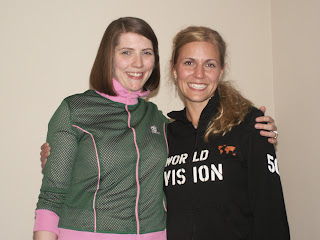 The Dunluce Castle on the coast. 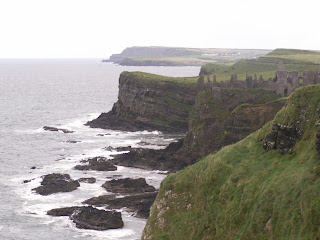 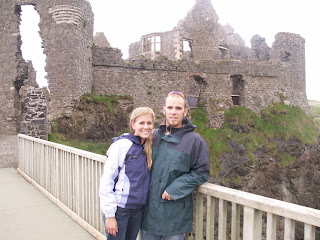 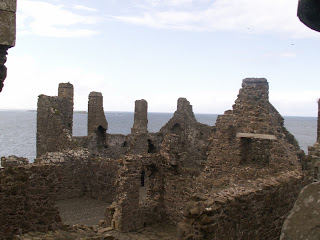 Well, our good friend Krista captured this wonderful moment Friday night in Muskegon, MI. I’m not sure what to say – I know I make faces when I play, but I had no idea they were this bad! Wow…

“Week in Review” – that sounds pretty lame, really. I’ll have to come up with some clever title for this like Grandpa’s “Weakly Note” – any suggestions, Grandpa? I’m obviously having a hard time hitting the Monday deadline, aren’t I!! As usual, we’ve had a pretty full schedule since I last posted. Let me “break it down” for you:

That should be it – we’re headed to Ireland next week so it will be probably much more interesting. Hopefully we’ll get some down time next week – I’m really feeling like I’m needing it. So we’ll see…

A tribute to our Creator! This festival is definitely one of the most scenic locations we’ve played. Downhere played on this stage to start off the evening. It was such a treat to have my parents out for this event. They drove from Montana to see us. I had fun getting excited with my mom when she saw Jeremy on the jumbotron. It was a blast sharing this part of our lives with them! They were also a big help at the merchandise table… thanks Mom and Dad!

During their set some lady threw this hat on stage and Jason brought it back to Jeremy for him to wear.

The river by the Gorge had a section that is known for it’s dove shape… my Dad took this picture with his phone.

My proud Father waiting for downhere to come on!

My Mom and I with the crowd behind us… Doesn’t she look fabulous in that shirt=}!

Update on the last week

Well, I told Erin I would do my best to do a weekly post on Mondays about what we’ve done during the past week, and I already missed my first post. How did Thursday get here so stinkin’ fast?!?

I’ll tell you how… we have been trying hard to just keep things together in the last little bit. Here are some of the noteables from the past week (and a bit):

And that’s where we’ve been this week – here in GA leading worship for these kids and taking naps in between sessions trying to recover from the crazy weekend. We’re pretty much recovered – just in time to mess it all up again by flying out to CA tomorrow for the weekend. I’m going to have to squeeze in some laundry somewhere… Okay – you should hear from me around Monday again – the update will be much shorter I’m sure. Later!